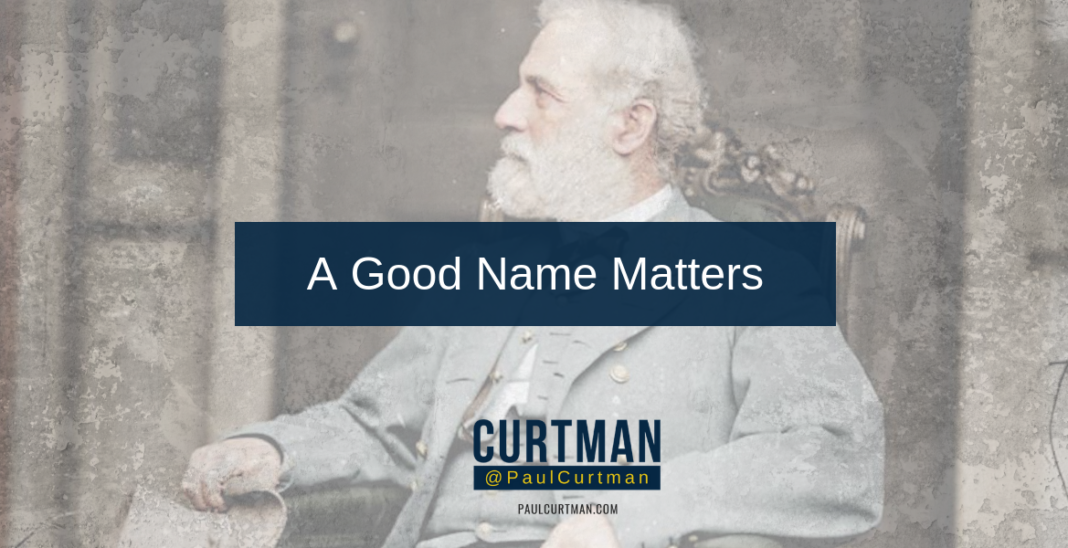 Robert E. Lee, General of the Confederate Army, brought the American Civil War to a close when he surrendered at Appomattox Court House in Virginia. The South had lost and during the war, Lee had his property at Arlington confiscated. It seemed under these circumstances, a man would not have anything left but Lee however, was different. He was known before and during the war as a man with impeccable integrity. After the war, his popularity in the South and the North was rising due to his character as well as his commitment to help the Union strengthen the country through President Andrew Johnson’s reconstruction efforts. Lee had received a number of offers throughout the country but took a position as the president of Washington College in Lexington, Virginia. No sooner had he taken the job than a representative of an insurance company offered him a yearly salary of $10,000. This was far more than the $1,500 annual pay he was making at the college. Lee told the man that he was unwilling to resign the position he had just taken at the college and he was afraid he would not be able to perform duties for two employers at the same time. The insurance representative said, “General, we don’t want you to perform any duties, we just want your name.” Lee told the man that his name was not for sale and added, “I do not consent to receive pay for services I do not render.”

Your name is important and sometimes it’s all you have left. It’s usually the first thing you tell people about yourself and it’s what people use to identify you when they talk about you to others. When you hear someone say your name you pay attention; when people are looking for you it’s what they shout over the noisy crowd. It is the one form of identity by which your friends and enemies know you. It means something to everyone who says it, sometimes in love, sometimes in anger or bitterness. Hearing the name Mother Theresa will invoke a different reaction than the name Bernie Madoff, the former being a Catholic nun world famous for her charity work and the latter being a criminal whose Ponzi scheme swindled over a billion dollars out of unsuspecting investors. The life you live and every decision you make is going to influence the reaction people have when they say or hear your name.

A last name is even more important because it doesn’t belong exclusively to you, it’s passed on from one person to the next down through generations. When you look in the mirror you can see a little bit of your father, grandfather and great grandfather, each of which, on your father’s side most likely, carried the same name you carry today. Think of the garage coveralls from the 1920s, the World War II dog tag, the program at the college graduation ceremony, the desk of a CEO, and the camouflaged name tape on the uniform of a man patrolling the streets of Bagdad during the Iraq war – a family name was written there. Now think of the mug-shots, broken contracts, and court docket entries courtesy of bill collectors for purchases that never should have been made – family names are written there too. You have to be careful with the property of others and the family name is no different. Be careful with it. Those who gave it to you expect you to leave it a little better than you got it and those who are going to take it from you don’t want you ruining it for them.

Your name will outlast you. At the end of the day, ask yourself if your name means enough that you want to protect it, keeping tight control over it, or whether or not you’re willing to sell it or trade it for something that won’t last or might even get you in trouble. Is your name something you guard and protect or are you willing to let others do with it what they want as long as you can make a few bucks? Robert E. Lee was the son of a hero of America’s War for Independence and after the leading the Southern army in the civil war, Lee had to be careful and wasn’t going to let an insurance agency put his name in a newspaper ad and present it however they wanted. His father had helped build the name and it meant more to Lee than to let others commercialize it for the sake of a dollar. Lee knew his name was all he had left. Good names are built on a lifetime of honor and integrity, hard work and perseverance, love and strength, compassion and resolve. It’s never too late to try to repair damage you may have caused or to start building your name altogether. Commit yourself to a strong attachment to these attributes so you can pass on your name better than you found it and set the bar as high as you can. We should have a name that commands respect, a name that we safeguard with our own honor and likewise, we should respect the good names of other people. A good name matters. It might be all you have when you’re at your lowest or it might propel you to the top.

Good name in man and woman, dear my lord,
Is the immediate jewel of their souls:
Who steals my purse steals trash; ‘tis something, nothing;
‘Twas mine, ‘tis his, and has been slave to thousands;
But he that filches from me my good name
Robs me of that which not enriches him,
And makes me poor indeed.