Character: An Important Lesson From the Kavanaugh Hearing For My Son 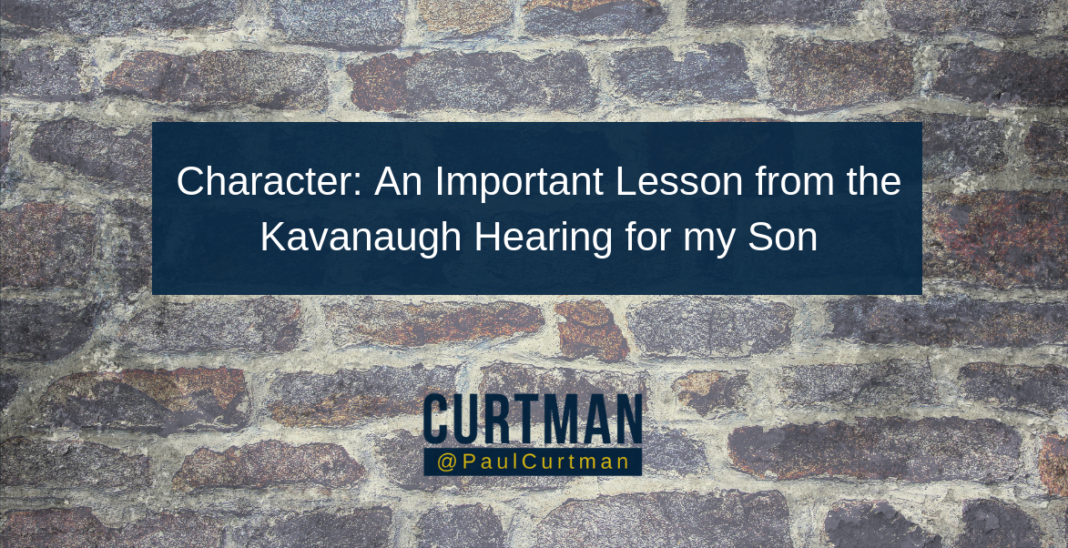 I watched every minute of the Senate Judiciary Committee when Dr. Ford and Judge Kavanaugh had their opportunity to testify. A very important lesson was reaffirmed to me as I watched and it isn’t about whether Ford or Kavanaugh is right or wrong – I’ve already written about how the left exploits victims and can’t be trusted by women on matters of justice and equality. What was reaffirmed is exactly how important it is to live a life of real character.

It was interesting that Judge Kavanaugh kept a calendar – a journal of events and people. I keep a journal myself, I have ever since I found out I was going to be a father for the first time almost three and a half years ago. At first, it was an exercise in record keeping but it turned into much more. I have filled books and pages with my own reflections on ideas, thoughts, events, issues, family, philosophy, politics, and whatever books I am reading at the time. I keep it for posterity and I fully expect my kids to have them and read through them someday whenever that may be. That being the case, every now and then I write a letter to my children, both of them currently under the age of three. I write to them about things to watch out for, the importance of family, building character, perseverance and so on. This morning I wrote about what I saw unfold yesterday and then I wrote a warning. Although it’s a warning good for them both, this one is especially important for my son when considering the circumstances behind what played out on national television yesterday:

Read what I wrote about. Look up Judge Kavanaugh for yourself and read about the accusations he was facing. In spite of over a hundred friends, both personal and professional, men and women, all it is taking to almost derail his nomination is basically one accusation.

You have to be so careful with your character. All it may ever take to bring you to your knees or keep you from rising up is an accusation that may or may not be believable. Don’t make it easy for people to accuse you. Live your life so that people always know you for being honest and hardworking, respectful, disciplined, honorable, dignified, unselfish, courageous, humble, strong, character driven and entirely above reproach in anything I have just mentioned.

You have one life to live – guard it with your character! It’s a lot to consider but you are the only one who can build your reputation. Someone will try to take it apart someday so build it solid and hard to break.

I want to share this because I think we are living in a dangerous age in America. It isn’t new really, in Salem, Massachusetts in colonial times, people were hanged and crushed under heavy rocks for mere accusations of practicing witchcraft. The difference though is they didn’t have a constitution and a presumption of innocence or due process. It’s a shame but since the beginning of recorded history, accusations have been used as a mechanism of personal and political attack – often at the expense of the accused as well as the accuser. There is a lesson in all of this. The lesson is to be a man of real character because your character may be the only thing you have to defend yourself against people with no character; the people who exploit pain, victimhood, or sometimes just believability in order to push their agenda at the expense of everybody else including people like Dr. Ford who everybody agrees has likely suffered an assault.

Your character might be your last line of defense, build it carefully and intentionally.