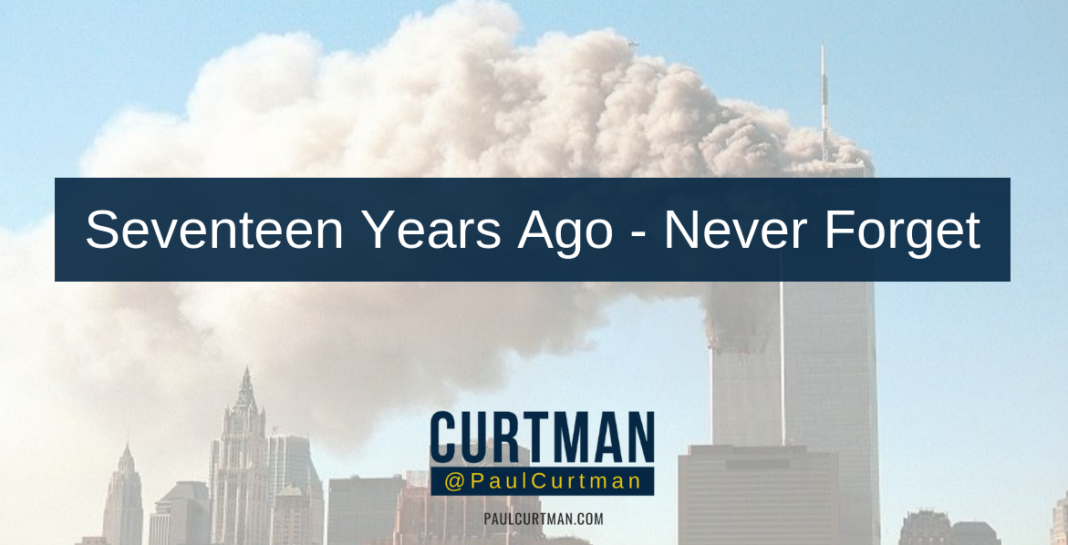 Seventeen years ago today, I was at the rifle range at Pearl Harbor with my fellow Marines. We were spending the week there shooting for our annual rifle qualification. It was still very early when a friend of mine from the sniper platoon ran into the squad bay shouting at everyone to wake up. From a TV mounted in the corner of the front room of our old military building, we all stood together in disbelief and amazement, as we watched the attacks continue to unfold. I remember thinking how the people in those buildings woke up that morning with plans for dinner and never thought in a million years that they would be among thousands dying violently at the hands of terrorists before noon.

Since then, so much has happened. One of the Marines I was standing with at that moment lost his life a few years later in Iraq while serving with another platoon. He was a good friend. Others I served with also perished over the years from the wounds sustained in combat and from the wounds they brought home and couldn’t cope with.

It amazes me that the guy waiting my table at Olive Garden isn’t old enough to remember and probably half of everyone who will be graduating high school next year wasn’t even born yet. These things should be talked about with reverence and sorrow. It should be almost tradition to remember the difficult times as well as the good. Part of our national identity revolves around the things we hold sacred. There isn’t enough of that today. We let too many important things slip in our lives and in our nation because we don’t hold things sacred like we used to. When that happens, our memory fades and we lose a part of who we are as a people. Let’s remember the people that were lost that day, the acts of bravery in the air and on the ground and every lost life and act of bravery that has come from 9-11 since. It’s all part of who we are as Americans.