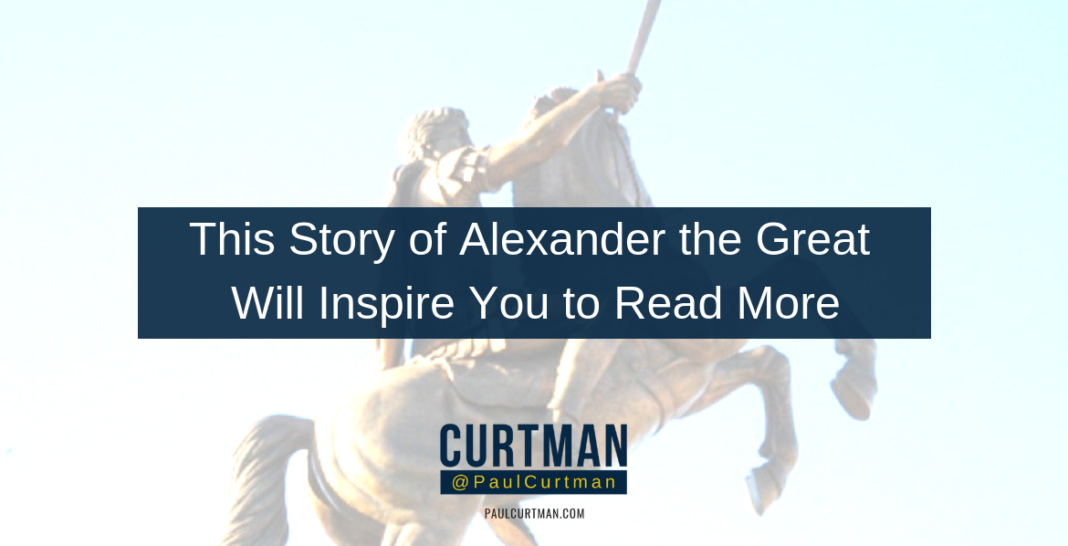 “Make America Great Again.” It’s a slogan that helped usher Donald Trump into the Whitehouse and is almost identical to the slogan Ronald Reagan used in his 1980 campaign, “Let’s Make America Great Again.” There was a lot more that factored into the elections of 1980 and 2016 but there is something about a call to greatness that makes people respond. History offers up names of great leaders but the greatest are given the title, “Great,” for the rest of the world to remember them by. You may remember hearing from history class, names like Alfred the Great, Catherine the Great, Frederick the Great, and Alexander the Great. Everyone knows who Alexander the Great is and some have been able to capitalize on his fame even to this day – even as a kid I was eating purple popsicles with flavors that bore the name, “Alexander the Grape.” Alexander the Great is a fascinating character study. To say he was ambitious is an understatement, he was born into a wealthy family and his father, Philip of Macedonia, was ambitious for himself and for Alexander also.

Alexander was on a track for greatness from his early years. From an early age, Philip saw the importance of education for Alexander and spared no expense to give him the best education he could find. Philip hired the renowned philosopher and teacher, Aristotle, as a private tutor to Alexander so he could receive only the best education. Aristotle had young Alexander reading and learning from historians and philosophers alike. He taught him to be aware of his environment and to think through things logically and carefully. Learning gave Alexander a head start on the ability to think well and reason through things at an early age. He learned to watch and observe and he developed insights early and grew wise beyond his years.

There is one instance in particular where Alexander’s ability to observe, reflect and think really paid off at an early age. The story goes that one day, Alexander’s father, Philip, was on the verge of acquiring a beautiful horse but the horse was so strong willed that it couldn’t be tamed. It didn’t seem anyone could get the horse under control so Philip was going to have the horse taken away. Alexander, being a young boy at the time, asked for a chance at breaking the horse and asked that if he could, that the horse would be his. Alexander’s father agreed. Philip and his men watched as Alexander took the reins, turned the horse around and talked to it until it calmed down. Then, he began to run alongside the horse this way and that way until Alexander finally jumped up on the horse’s back and gave it a little kick and took off toward the end of the path. Philip was amazed to see his son successfully turn the horse at speed and come racing back to him and bring the horse to a full stop. Philip was so excited to see his son do this that ran up to him, kissed him and told him he would one day far outperform even him as king.

As Alexander watched Philip and his men try their hardest to get the horse under control, he saw things no one else could see. He noticed that every time the horse looked down it was startled by its own shadow. This is what kept causing the horse to jump and rear up. Meanwhile, the men just assumed the horse was simply too wild to tame. Everything changed though when Alexander walked up and turned the horse around into the light and away from its shadow and in the end, he won the horse for himself. He could see what the cause of the horse’s excitement was, he also knew that he was the only one to see it. Alexander saw the opportunity in this and at an early age, he used his insights to outsmart the horse and his father, the King of Macedonia. If you want to be great, you have to know some things. Education helps you learn how to think better. If you can think better than other people, you’ll see opportunity where others don’t.

If I could read the thoughts of other people and know what they were thinking, I would be the most powerful person in the world. When I was in the Marines, I was constantly reminded that knowledge is power and I was encouraged to always be reading books from the Commandant’s reading list. When you read a book, you are literally reading the thoughts of other people. Learning information that other people already know and having insights into their mind so you can see how they think is powerful. You can become a better leader on the battlefield just by reading what Frederick the Great had to say in his own writings about strategy and leadership. You can understand more about people skills by reading the “mind” of great social observers like Dale Carnegie who wrote and lectured extensively on the subject. If you want to know what George W. Bush or Barack Obama know about politics and leading the country, you can read their books and learn valuable information that you might be able to use to run for office or help someone else campaign. I have books that contain the speeches of great men like Ronald Reagan and I’ve learned a lot about his style of public speaking as well as how he approached everything from addressing the death of an American soldier with gratitude and humility to handling the cold war with Russia with strength and resolve. I’ve been able to see into the minds of great men by reading their thoughts in the books they wrote.

What is so interesting about Alexander the Great is that even at a young age, he had ambitions to be great. The ancient historian Plutarch said, “It was neither pleasure nor wealth, but excellence and reputation that attracted him.” Alexander’s “Greatness” had far more to do with his desire to be great. A desire that necessarily required him to be a good thinker. Greatness doesn’t just happen accidentally, it takes diligence and a commitment to learn things. This may come at a cost, the price of a book or if you’re able, a tutor the caliber of Aristotle. Think of it as an investment in your greatness. The best advice I have ever taken was to start reading. Although there isn’t a king paying for Aristotle to give me private instruction, I can still know what Aristotle taught in ancient times because I have his books.

Start reading. Take notes. Underline and highlight passages. Write your own thoughts in the margins and between the lines. It’s okay to start and stop, or not finish altogether if you don’t want to. It’s also okay to skim and skip chapters if you want. The point is to be reading so you can learn to think better. Grow from reading the thoughts of other men; you’ll develop a deeper awareness and start to notice things and opportunities that others don’t see and you’ll be greater for it.