5 Reasons Why Men Should Wear a Watch 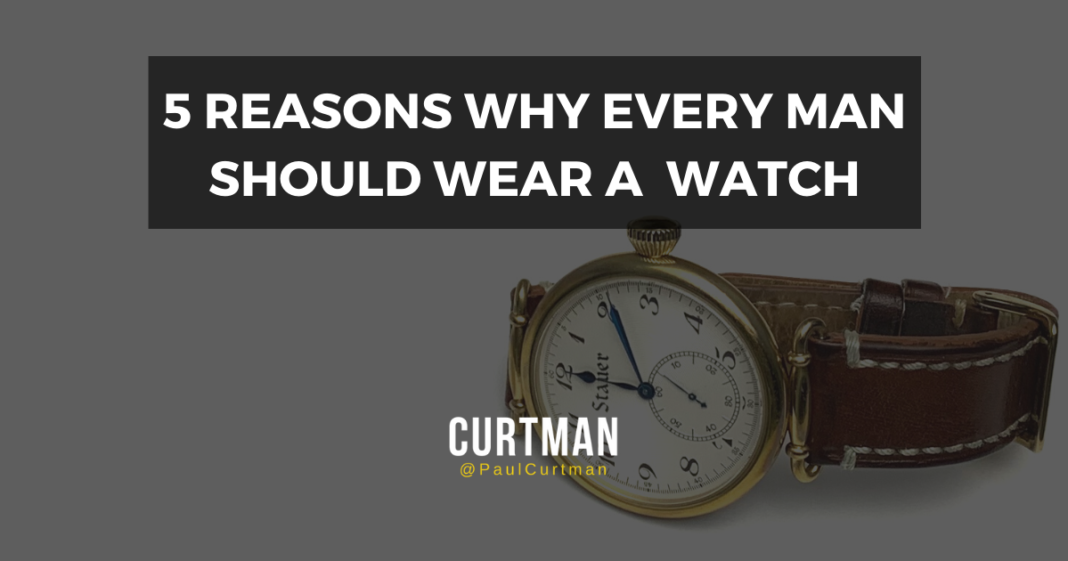 Imagine that it’s 1917. A young lieutenant is tightly huddled against the wall of his trench with his right hand firmly gripped around his Colt 1911. German machine gun bullets are flying over his head. He adjusts his footing in the mud all the while staring down at his wrist. He looks past the gold bezel ring of his watch to tighten down the hand-stitched leather band holding it firmly to his wrist. He focuses his gaze on the second hand, parchment white in color, as it tics past 15. He knows the moment is coming and the seconds count. He pulls his trench coat back behind his knees so it doesn’t restrict his movement when it’s time to go. He can feel the second hand tic against his wrist as it strikes 20. He only has moments now to consider his next move and he wastes no time evaluating his plan. As the second hand hits 25 he can almost hear the tic from the mechanical gears of his time piece over the sounds of the bi-planes strafing the battlefield just yards away from his position, it even seems louder than the explosion of the German artillery overhead. Through the smoke and dust he watches the second hand move past 27 and he inhales – deeply. The second hand strikes 30 and the lieutenant looks up, locking eyes with his troops as he shouts at the top of his lungs, voice breaking, “FOLLOW ME!” As he springs up and takes his first step onto the battle field, he immediately feels a sense of relief. Before his eyes, he sees the German lines being busted apart by American and allied artillery – artillery that had to start falling at just the right second to allow him to lead his men forward through the chaos of the battle field without being cut down by the German guns. For the lieutenant and the combat leaders he was depending on to pull off this risky attack, every second counted for victory.

Although men have worn watches for hundreds of years, they began to become popular around the world when combat leaders in the trenches of World War One would take their pocket watches and strap them to their wrists for efficiency. Soon wrist watches were being designed for use in the trenches to help aid in the planning and precise execution of battle strategies. After the war, you almost couldn’t come across a man without a time piece on his wrist but recently, things have begun to change. With a lackadaisical approach to time and for many, life in general, many men have lost their sense of battle. I’ll bet you won’t find a 30 year old man with an appreciation for time who lives at home on his parents’ dime. Men who care about time care about how they spend it and they take care to spend it productively. There’s a lot you can tell about a man who wears a nice time piece. Here are 5 reasons why men should wear a time piece.

1. It’s an accessory that underscores your maturity.

There comes a time in life when a young man begins to understand the things that really matter most. He learns to divide his time for the things he cares about. As he gets older, his time becomes more precious and valuable to him and he wants to keep a close eye on it. His time pieces are well taken care of because he depends on them to tell him the truth about how much time he has from day to day to spend on the things or with the people he cares about.

2. A watch will improve your style.

Let’s face it, we live in an age where we keep all our important information on a mobile device. Although there are efforts to revive simple technologies from days gone by, there is one item that will never go out of style – the wrist watch. A nice watch adds a touch of classic style that lets people know that you can’t be bought off with the latest fad or trend – that you know how to keep the main thing the main thing and you know how to do it with style. Whether it’s a mechanical time piece with a leather band or silver links, a watch will immediately add a classic style to your look.

3. Wearing a time piece speaks to your precision.

You wear a time piece on your wrist because promptness is important to you. Like the commander on a battlefield, every second counts and you want to be where you need to be when you need to be there. If you wear a mechanical watch, you see the value in craftsmanship and engineering and although you could wear a small computer on your wrist, you choose to wear a piece of art, skill, and craftsmanship fined tuned with precision to mark the timing of the sun and the seasons – and sometimes battle.

“Preparation is about precision.” —Conor McGregor

4. It will keep you from getting lost in your phone.

We live in a world where too many people are absorbed by their phones – always rushing to them every time they hear a ‘ding’ from a social media notification. Whenever someone asks the time we reach for our back pocket and grab a device that contains our entire world and once we check the time, we can’t help but check our status updates, our Instagram likes, Facebook comments or Twitter threads. How about instead, when someone asks the time, we simply pull up our time piece as men have done for hundreds of years, and politely give the time like a perfect gentleman.

5. It demonstrates an understanding of value.

There is the cost of a thing and then there is the value of a thing. When you wear a wrist watch, you participate in an activity which emphasizes your understanding of value. In other words, you hold in high regard the importance and worth of your time and you have an appreciation for the engineering and craftsmanship that accompanies a mechanical timepiece. Furthermore, you see the utility in having it attached to your wrist where it is always at the ready to keep YOU always at the ready when your time matters.

“The present is the point at which time touches eternity.”—C.S. Lewis