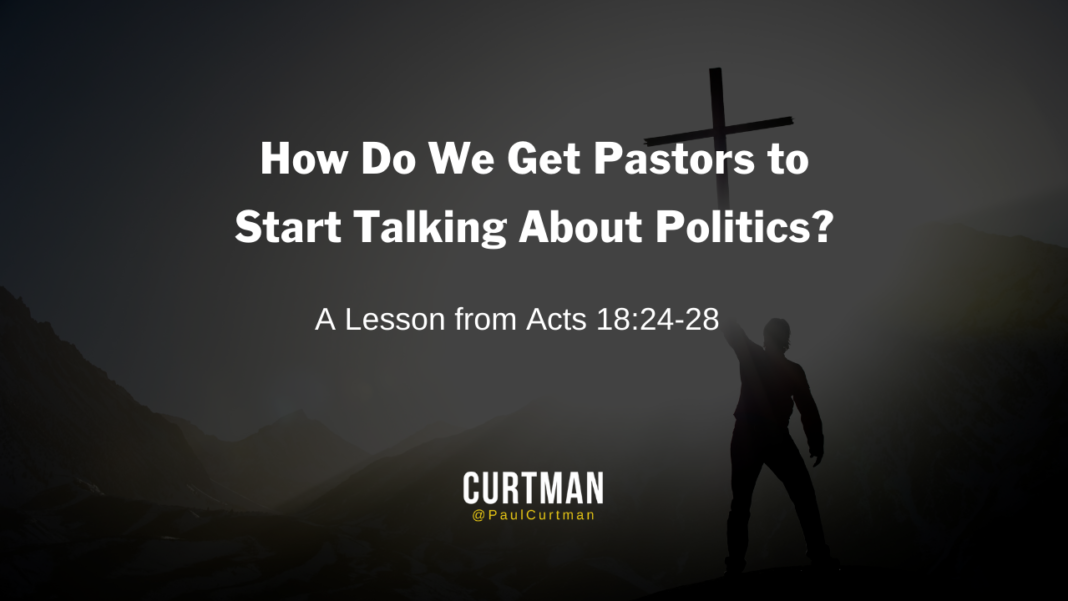 Another great question I recently received as a follow up to a previous post: How do we get pastors to start talking about politics?

Here’s my answer – I agree with people that say we just need to trust God but I also remember James 2:14-17 and as I told one person on Facebook recently, James 2:14-17 speaks to people who don’t use the tools God gave, them to do what they’re asking God to do for them – working towards the ends you’re praying for is, in fact, a direct expression of your faith.

If Christians are asking God for a country where they can be free or a country that doesn’t kill unborn babies, , and they don’t exercise the power they have to vote toward these ends, then they are failing to express their faith in God to answer their prayer because they’re actually working against him by not voting accordingly.

The problem I’ve encountered the most is pastors who are hesitant to speak out on political issues or who even fail to just encourage their churches to vote because they are afraid they will lose their tax exempt status. Or else they use that as an excuse to justify their own laziness, cowardice or inability to think and study out the issues and the Bible. I’m not trying to be harsh but these are some observable reasons I’ve encountered on a few occasions. I’m not sure any church actually ever has lost their tax exempt status but maybe some have. It’s a betrayal of what God requires – the Bible has a lot to say about the very issues we vote on and the Bible instructs us to preach the “whole counsel of God” Acts 20:27. Unfortunately some Christians and preachers fail to preach the whole counsel of God in exchange for their 30 pieces of silver.

There were times when the Apostle Paul was imprisoned and the Lord used a miracle to free him but then there were times when Paul emphasized Roman law and the freedom guaranteed by his own Roman citizenship to demand his freedom and safety such as in Acts 16:36-37. As Christians, we need to certainly rely on the providence of God for our wellbeing as a nation and that also involves using our earthly citizenship to keep us free to promote our citizenship of the kingdom of God. We obviously don’t need certain laws to be Christians but we do need certain laws to be free Christians.

Acts 18:24-28 tells of Priscilla and Aquila who, when they heard the teaching of Apollos, who the Bible already said was fervent in the spirit, “they took him unto them, and expounded unto him the way of God more perfectly.”

I think the Bible teaches a “way of God more perfectly” suited for Christian stewardship of our country than to not engage and congregations should encourage and have the back of pastors that will take a stand.