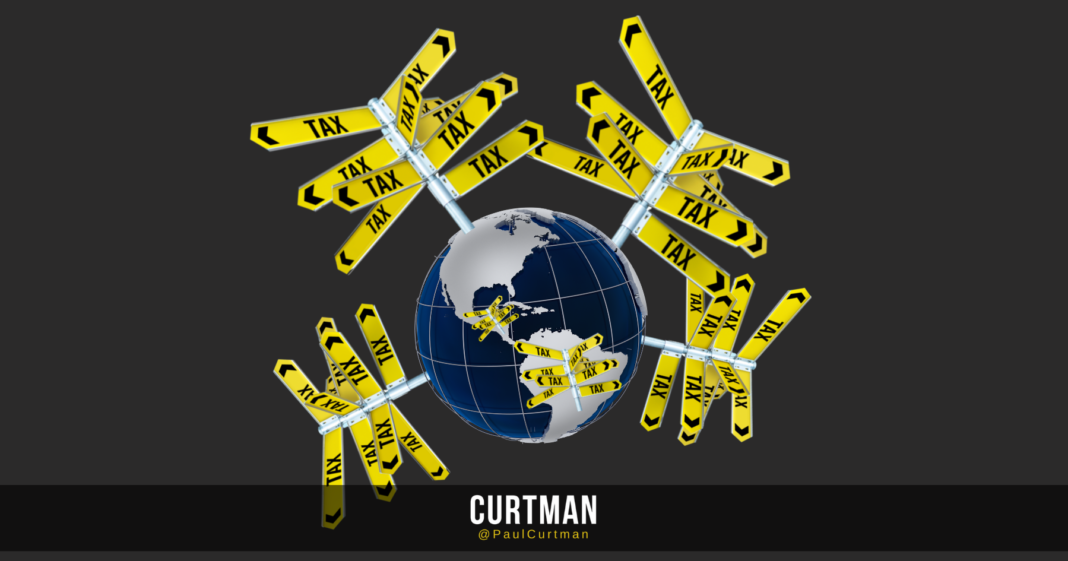 President Biden recently secured global backing for global minimum corporate tax of at least 15%. The policy is currently being drafted and lobbied by Treasury Secretary Janet Yellen and the details are being negotiated at the G7 and G20 summit.

2.
JANET YELLN DOESN’T HAVE THE EXPERIENCE TO CREATE PROPOSALS FOR AN ACTUAL BUSINESS LET ALONE PLANET EARTH.
Janet Yellen, Biden’s Treasury Secretary, met privately with her international counterparts in order to persuade them to avoid what she calls a race to the bottom, competitive rounds of tax cuts designed to attract economic investments to each respective country.

This tells you everything you need to know about what these people understand about the relationship between economic growth and tax policy. Janet Yellen’s entire career has been in academics, she has never signed a paycheck, worked in a marketing department, did the accounting or tax preparation for a business or even put together a business plan for a startup but now she is creating a proposal for the entire planet and already has 130 countries on board.

3.
IT’S A CORPORATE TAX WITH A TWO-FOLD MISSION (REFERRED TO AS PILLARS).
1). The GMT is designed to ensure the “biggest and largest” corporations pay income tax in the country where their product is consumed, not just where they establish headquarters.
2). The GMT calls for a global minimum tax of at least 15% on a country by country basis. Importantly, each country’s legislation would require corporations that continue operating in noncompliant countries to “make up the difference” to their home government.

4.
PASSAGE OF THE GMT HINGES ON CURTAILING THE CONSTITUTION.
Yellen is working with lawmakers to advance the legislation through “reconciliation” – process that would allow the proposal to move forward with a simple majority rather than the required 60 votes usually needed in the Senate.
This is a total disregard for the U.S. Constitution, specifically Article 2 Section 2 which requires two thirds of the senate to approve international agreements between two or more countries.

5.
IT’S ROOTED IN MARXIST IDEOLOGY.
In chapter 2 of the communist manifesto, Karl Marx introduces an income tax burden that grows heavier relative to income. The result is that people that make more pay more – thus incentivizing people from earning or even accumulating more wealth. This is a necessary step in the direction of a classless society. The global minimum tax is rooted in a Marxists ideology and with that the consequences of the plan are fully intended by design.

The entire point of Marx advocating for a graduated income tax is to stunt the creation of wealth and lessen the wealth and and economic disparities between people – a major problem with this is that it eliminates incentives within the market that not only create wealth but are also responsible for advancements in technology, medicine, education and everything that helps even the poorest people find economic mobility and create a better life. In short, it helps make everybody equally poor, equally less healthy and equally less educated. Don’t take my word for it though, take the word of people from countries that have actually tried it.

6.
IT WILL STUNT ECONOMIC GROWTH AROUND THE WORLD.
Even if the GMT is designed to be a backstop to tax rules already in place it would no doubt force a heavier burden on economic investment across borders and slow global economic growth to a crawl. Higher tax revenues for the government means less revenue for the private sector, companies, and small paychecks for employees – translate that to mean less research and development into new products and the jobs that go with the research and development as well as the marketing and manufacturing of new products. In order to compete and be the first to market with new products that help lift the world out of poverty, many companies look for places to operate from where it costs less to invest.

Tech companies are the primary target of this global scheme but first consider that U.S. companies have an enormous global footprint and employ nearly 50 Million people around the world – jobs made possible because companies currently have the freedom to find countries to allow them to keep more money for overhead and reinvestment.

Not only does the Global Minimum Tax fail to put America first, it is dangerous to economic prosperity and will stunt the growth of the overall global economy and put under developed or developing nations and an even greater disadvantage.