Bitterness: How It Grows and How to Kill It 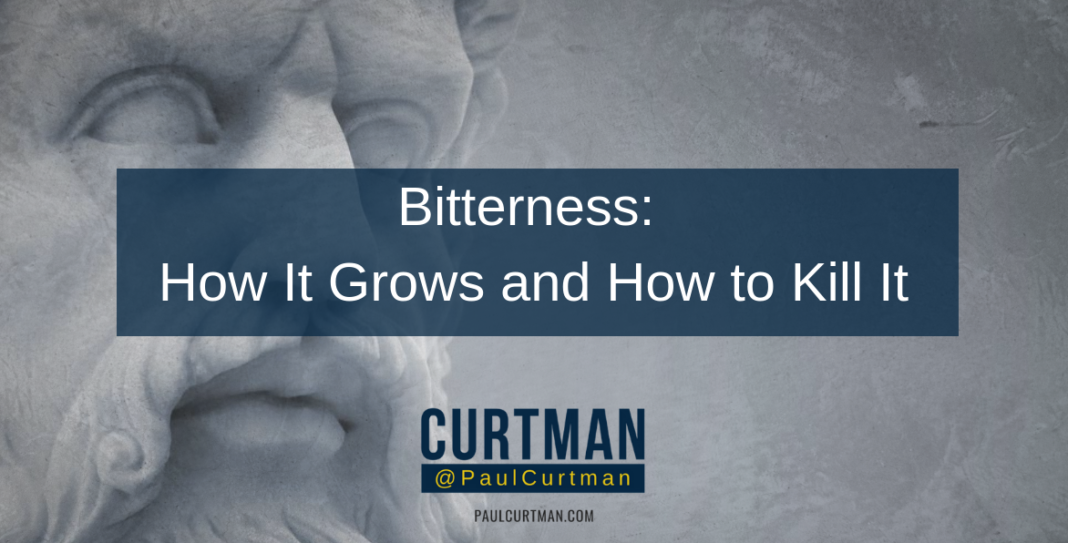 Several years ago, I made a big change in my life. It wasn’t a large purchase of a home or a sudden career move, it was something far more valuable. I quit being bitter toward someone and my days have been happier ever since.

Sometimes it’s ok to be angry – sometimes it isn’t. It’s ok to be angry at things like infidelity, lies, laziness or arrogance and sometimes our anger can be a useful tool to spur us to action to get things done and make changes. Anger might compel someone to lobby their state capitol for changes in policy or their school board for a change in curriculum. Anger can be useful and productive but you have to be careful about allowing yourself to be angry and you have to be in control of your anger so it doesn’t control you. If you’re angry at something, or especially someone, and your anger isn’t causing you to tactfully and appropriately improve the situation, be careful. Anger like this can be dangerous. If you let it, this anger well fester inside of you and before too long you’ll not only be angry with someone but you’ll also begin to resent them. This quickly becomes outright bitterness – a deep seated angry resentment and sorrow that completely robs you of your happiness and peace.

I once heard a woman discuss bitterness as part of a speech at a dinner I attended. Her name was Gianna Jessen. I never met anyone I thought could harbor an understandably justifiable bitterness except for Gianna only because her mother marked her for death before she was even born. She was scheduled to be aborted and on the day of her supposed death, she was scalded by a burning saline solution rather than taking her first breath in the arms of a loving mother. Gianna survived this attempt on her life but a side effect of this trauma is that she has had to live with cerebral palsy. She lived in a foster care home and spent her early years proving doctors wrong when they said she would never walk. Gianna could be bitter with her birth mother and circumstances but instead, she chooses to let all of this make her a better person. The night I heard her speak, I heard her say, “Bitterness is a really great way to die while your still alive. Try forgiveness. Try giving it to God.”

It’s true, bitterness will kill you. It will rob you of everything you thought you were and prevent you from being everything you want to be. Even when times are good, bitterness that you’ve held on to has a way of springing up inside of you without any provocation. It lingers within you and every moment it stays, it grows stronger, driving its roots deeper into your heart. Before too long, it becomes such a part of you that it almost feels normal to feel this way. You hate that it’s making you an angry person but you try to justify it, thinking to yourself, “I’m not the one in the wrong here, I have a right to feel this way!” What was a bright sunny day full of joy suddenly becomes dark when the overcast of bitterness rolls in unexpectedly. And why? Because you thought of that person or you thought of how unfair something is.

Bitterness is a cruel irony. The more bitter you are with someone and don’t want anything to do with them, the more they actually control you. Epictetus once said, “A person capable of angering you becomes your master.” Just like that, bitterness will have you thinking about the one person you don’t want to be thinking about. It will have you using energy on the one person you don’t want to lift a finger for. Bitterness will make you act insane.

You’re also wrong if you think other people don’t notice what bitterness is doing to you. There’s just something about bitterness that changes a person. At first people will think it’s just a little frustration you’re dealing with but bitterness is never satisfied and it wants to be shared and take root in other people as well. As crazy as it sounds, people who would otherwise have nothing in common or anything to do with each other will suddenly begin to bond over their mutual bitterness toward someone else. Don’t get stuck in the trap of bitterness. Avoid it like the plague. It will make you an angry person and you will appear arrogant and prideful. But that’s really what bitterness feeds off of – pride.

There is really only one sure fire way stave off bitterness whether it’s creeping in or already rooted into your core—forgiveness. Forgiveness is the only thing powerful enough to kill even the most deeply rooted bitterness. You may not want to forgive because you may feel like you’re giving up a position but trust me, it’s more than a fair trade. Maintaining bitterness toward someone will be far more damaging to your pride then forgiving them ever will. Bitterness thrives on pride, kill it and the bitterness goes too. If Gianna can forgive the doctor who tried to kill her and also forgive her own mother who wanted her dead, surely, we can forgive people who we think have hurt us. I’m a Christian. I didn’t know what it felt like to really experience forgiveness until God forgave me of my sin. Things are different now and I know what forgiveness is and how powerful it can be. I can give situations, circumstances, and people over to God. He’s the ultimate forgiver and I’m now capable of forgiving anything because He can. There is nothing more liberating than exercising forgiveness and being free from the bondage of anger and bitterness.