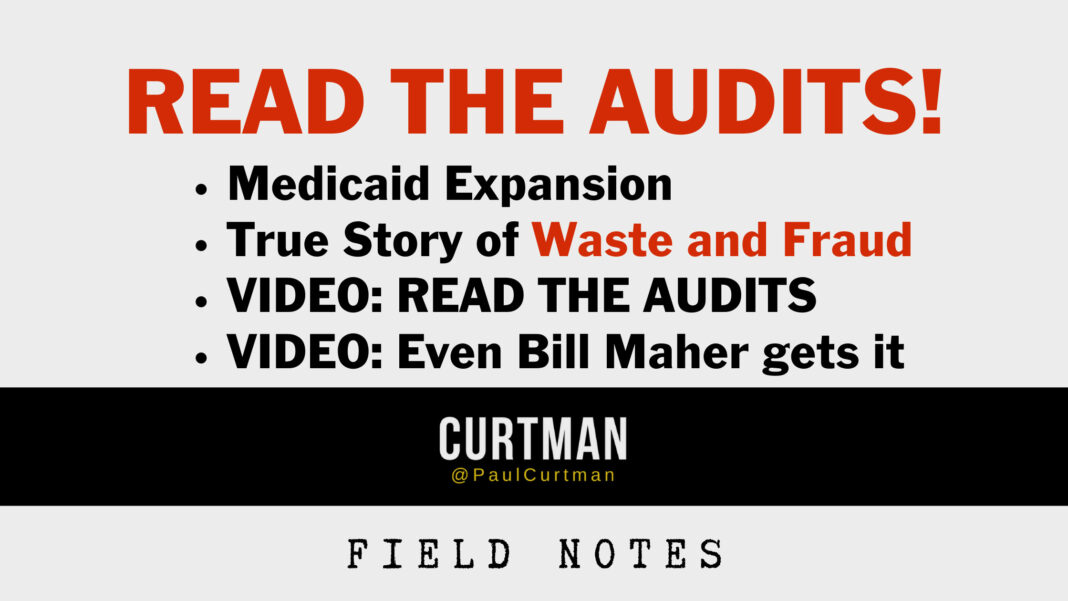 The real problem with government is that it’s run by people who love to pass out money without ever really trying to consider the soundness of the attached policy. Government grows and becomes more waste-full leaving more problems for people in its destructive path.

The argument for expanding Medicaid boils down to the argument that, ‘the federal government will cover 90% of the cost to expand eligibility so we would be heartless fools not to.’

While this might sound reasonable to some, you might find yourself joining the opposition to expansion after considering just a few other points.

FIRST POINT: We are relying on “government entities” to make the case for why they can be trusted with more money.

“State government entities are estimated to have one-time costs of approximately $6.4 million and an unknown annual net fiscal impact by 2026 ranging from increased costs of at least $200 million to savings of $1 billion. Local governments expect costs to decrease by an unknown amount.”

Whenever these “government entities” have had their estimates audited, they seem to have been way off.

Take this 2018 audit report of the Department of Health and Senior Services where the state auditor specifically calls out the departments unreasonable estimates regarding cost savings.

PRO TIP: Whenever someone is telling you that your are saving money by spending more money, beware. This trick is used by credit card companies and everyone else who literally makes it their business to get you to spend more money.

SECOND POINT: Missouri lacks the ability to actually identify individuals who are most in need.

Again, I’ll point out the same audit where our democrat state auditor actually stated, “The Department of Health and Senior Services lacks an effective system to identify individuals most in need of services for eligibility purposes and to score the severity of need among participants when determining the appropriate amount of services authorized.”

And Missouri’s leftist want to expand that? By the way, so do some members of the MO GOP such as State Senator Lincoln Hough who stated to the press his desire to expand this inefficient and wasteful system. Hough calls on the constitutional amendment that passed as his reason to expand but even then, the constitution does not require the state legislature to fund the expansion.

THIRD POINT: The system is far too open for waste and fraud to have a serious discussion about expansion.

MO Healthnet was been called out for “Weaknesses” that “prevent the proper execution of MO Healthnet Division system edits to timely detect and prevent overpayments to some providers.”

Our legislature need to address these issues before discussing expansion.

TRUE STORY – POOR SERVICE: When I was in office, I had a disabled woman in my district who had filed multiple applications to receive Medicaid benefits that she was already entitled to but every time she called, they told her that someone else was handling her application or that they never received it. By the time she called my office, she had filed at least twelve applications over the course of four months.

What are we supposed to tell these people? “Sorry, we just put a bunch of other people in line ahead of you.”

It would be entirely reckless for the state legislature to expand a broken system that can barley provide good service to people who are currently eligible.

Expanding Medicaid at this point in time would be to expand a broken system which already has people waiting in line for months on end at the door of a department that is incapable of triaging the most needy and bringing them to the front.

TRUE STORY – FRAUD: I once had a woman from Illinois call my office asking how she could get Missouri Medicaid benefits. I was confused – I told her that unless she is a resident she would not be able to get Medicaid from Missouri. She then proceeded to tell me about her neighbor who was getting MO Medicaid benefits from Illinois, Missouri and another state that I can’t remember right now.

She called back. At that point I instructed my Legislative Assistant to give her the number to the Medicaid fraud hotline with the instructions that she should tell them what she was trying to do and they would help her out.

Watch this video from the Joe Rogan Experience – even progressives like Bill Maher can see that its a problem when government takes a carefree approach and passes out money.

Right now the Missouri Senate is sitting on a couple of billion dollars that many are saying should be used to expand Medicaid.

Call you senator today and tell them that they need to do the right thing and use that money for a one time service to fix our infrastructure needs somewhere where that will actually do some good.

That money is better spent fixing our broken Medicaid system before expanding it or even fixing something like our highway infrastructure (which they constantly want to tax us to get fixed).

Or, send it back to tax payers.

Here is JUST ONE IDEA that I had for solutions to stay ahead of problems being discovered by audits.

Watch this video of me presenting a bill demonstrating why our legislators need to use public committees to go over audits – maybe a legislator please pick up my old legislation and get it done.