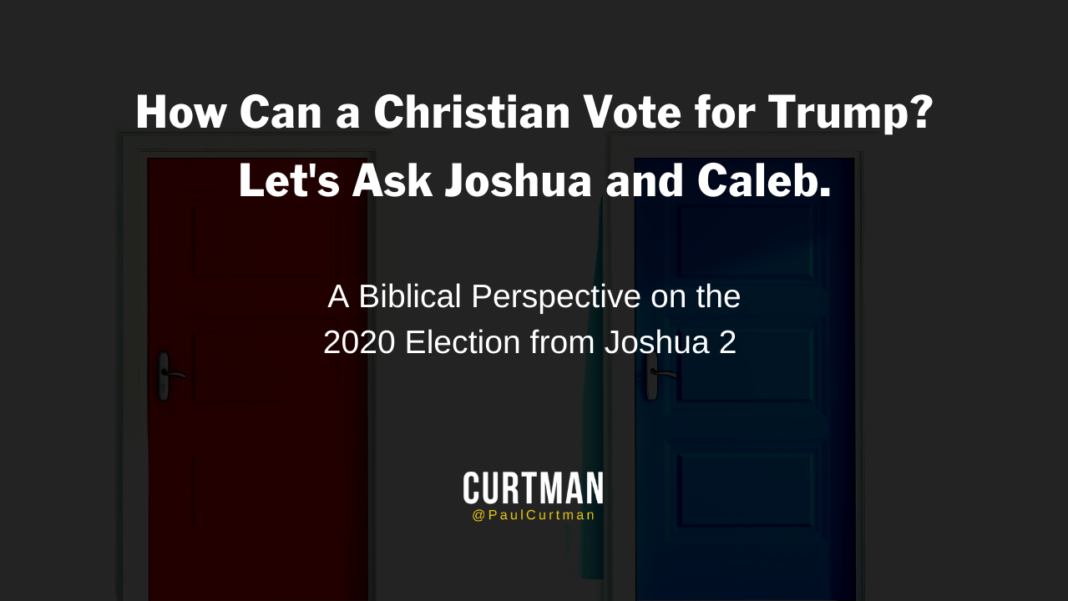 This is a question I received from a friend who, like many, struggles with Trump as a candidate. I want to share his question and also my response.

“Hey there Paul, it’s been a while since we have conversed but I saw your post about “Make Christian Men Great Again,” and I agree with you 100%. My concern is that I feel that so many Christians are being deceived by Trump, including people who I once considered great defenders of the faith such as Franklin Graham. What do we do? I am convinced that Trump will say and do whatever he can to stay in power. I do appreciate some of the things he has done, I think he has made some great strides in reducing taxes as well as the best Supreme Court nominees since Justice Thomas. I knew as soon as he referred to Second Corinthians as Corinthians 2 that there is no genuineness to this guy, he will say whatever will make the “religious right” happy. I just don’t know what to think anymore and would appreciate some direction and insight.”

I’m going to answer this question but before I go on in this article, I first want to say that I get it. In 2016 I used my platform as a member of the Missouri Legislature to endorse two or three other candidates until Senator Ted Cruz was out of the race leaving only Donald Trump.

Let me start with this, as soon as Trump said “two Corinthians” instead of “second Corinthians” I felt the exact same way as my friend who asked the above question. It became clear to me that Trump was not an avid reader of the Bible or listening to sermons on sermonaudio.com let alone attending church on a regular basis because Christian people by and large almost never, if ever, refer to the second book as “two.” I actually brought this issue up to my dad, a full time pastor of nearly 50 years and I used this as an example of Trump saying whatever he thought would work to get in good with Christian voters. My dad has been a full time pastor for far longer than I’ve been alive and I was suprised when he told me that he’s heard people say “two Corinthians” and it alone wasn’t a good reason to not vote for Trump. I continued to debate this and other issues about Donald Trumps qualifications throughout the summer of 2016.

About a month before the 2016 general election I was speaking to a crowd of pastors and church leaders at a meeting in Orlando, Florida and Donald Trump made an appearance and spoke for about 30 minutes. He was unscripted, as usual, and he said something that really made my heart break – for him. I was at a table about 25 feet away from where he was standing. He was speaking about how the Johnson Amendment was implemented and used to suppress churches’ freedom of speech and he said he wanted to work with congress to strike it out of the law. He said if he could do that that it might be the only thing that gets him into heaven. It was abundantly clear to me at this point that this man had never known Jesus as the Way the Truth and the Life, as the door that allows him to have a relationship with a loving and forgiving God. What a terrible thing that a man would be in his 70s and be under the impression, even if faintly, that he had to work his way into heaven. Ephesians 2:8-9 says “For by grace are ye saved through faith; and that not of yourselves: it is the gift of God: Not of works, lest any man should boast.” Over the last four years I’ve learned not to confuse someone trying to be Christian-like with someone who tells people they are Christlike when they really are not. The former might be someone who doesn’t know Christ but is trying to find out how to know him. The latter is someone who tells lies about their own spiritual greatness. It’s important to not let our bias become an obstacle to our ability to discern between the two. In other words, I don’t believe that Donald Trump is, or at least was at the time, a born again Christian but I can certainly appreciate someone making an honest effort to relate to Christians. And he was being honest – he never claimed to be a man of strong faith the way George Bush and other politicians do when the cameras are rolling during campaign season. Trump has however, routinely expressed his admiration for people of faith and what they mean to him as an American. When he held up a Bible in front of St. John’s church after rioters set fire to it, the bias against him was so strong that no one in the media bothered to give him the benefit of the doubt that it was a gesture or support for the Church and Christendom but rather they immediately blasted him as a hypocrite for not being good enough to hold a Bible or using it as a photo op to satisfy his own vanity.

When you look in the Bible you’ll see Donald Trump-like characters. At this point you might expect me to say that we are all flawed and all the mighty heroes of the Bible had flaws but that isn’t where I’m going. I’m talking about the people that God used that you wouldn’t expect because of who they were and the type of life they led; the people who served only a single purpose but a necessary one that God used to accomplish things far greater. Take for example, Rahab the harlot. After two Hebrew men, Joshua and Caleb, entered Jericho to spy out the city, the king of Jericho discovers their presence and sent his soldiers to find them. They needed help to escape the king and Rahab took them in, hid them, and then helped devise a plan to fool the soldiers and help the men escape. What would have happened in Joshua chapter 2 if Caleb and Joshua refused the help of Rahab when she offered to help them escape? Rahab didn’t know God except through the testimony of His children. She told Caleb and Joshua, “for the LORD your God, he is God in heaven above, and in earth beneath.” Joshua 2:11. Rahab was also a harlot, living a life of sin, but in spite of that, God used her to deliver his children from the hands of the enemy.

Part of the message here is that God’s ways are not our ways. If Caleb and Joshua held Rahab to the standard that many Christian voters hold to Donald Trump, they might have still been in the city when the walls fell as they waited for someone to help deliver them who would have been a better role model for their kids. The stakes are high in this election – socialism is looking to capture us and we need to elect someone who can stand against it.