“I Love Lucy” and Communicating with Non-Verbal Signals 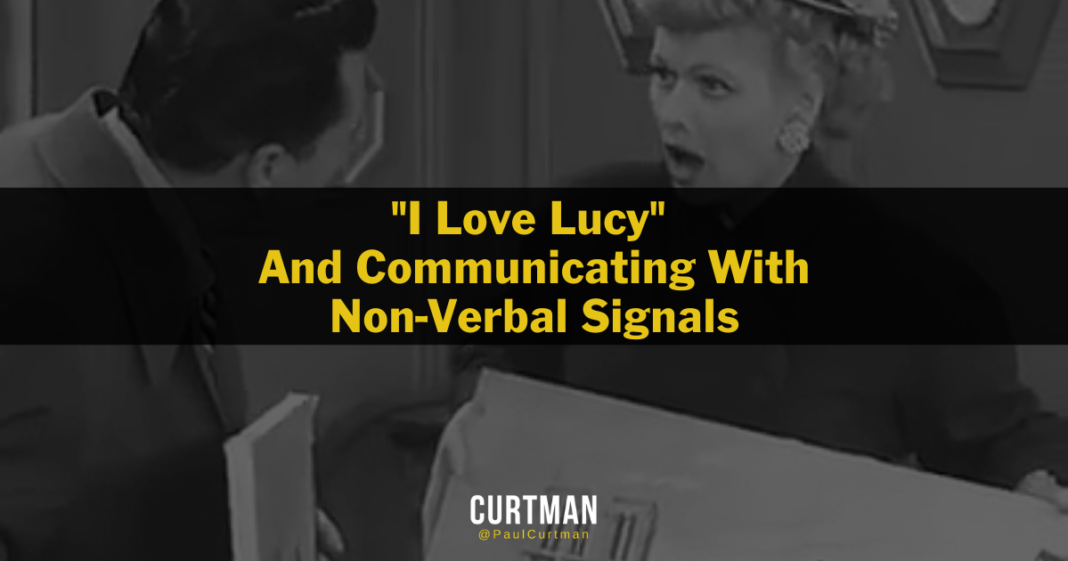 Everybody gives off are non-verbal signals. What signals are you giving off? I’ve watched body language specialists comment on a politicians speech to help audiences understand whether or not the politician was being fully transparent or whether or not he was hiding something. There are many things to consider when trying to read non-verbal signals and they have to be considered together. You can’t just say that since a persons arms are crossed then they’re being defensive because some people cross their arms when they are comfortable. What then do arms crossed on a politician signal? In a case like this you have to consider the other variables at play. For example, what is his tone of voice? Is he smiling? Are his eyebrows raised or furrowed low. Does he overall seem at ease or is he fidgeting and nervous looking? Is the rate of his speech casual or is it fast and assertive?

I Love Lucy was the first TV show to record in front of a live studio audience. When the idea was first pitched, there were a lot of naysayers who said it was to risky – the actors would have to perform well enough to solicit an audible response from the audience in a way that was fully predictable by the writers. Fortunately for the writers and the producers, Lucille Ball was a master at non-verbal communication. Whether she was speaking or not, many if not most of the audience responses to the gags in the show came from Lucy’s facial expressions and body language than anything else. Go to YouTube and watch a clip of I Love Lucy with the sound off and you can clearly see when her character is happy, sad, surprised, disgusted, frightened or any other emotion and reaction in between. You can study body language by watching Netflix. All you have to do is watch a show and pay close attention to the facial expressions and the gestures of the actors as they speak to each other.

Watch this clip from I Love Lucy. Watch it with the sound off and then with the sound on. You can see how Lucy and the other actors subtly exaggerate their facial expressions and body language in order to better communicate the their response to the predicament they find themselves in.