IS JASON SMITH HOLDING THE TRUMP CARD FOR MO SENATE 2022? 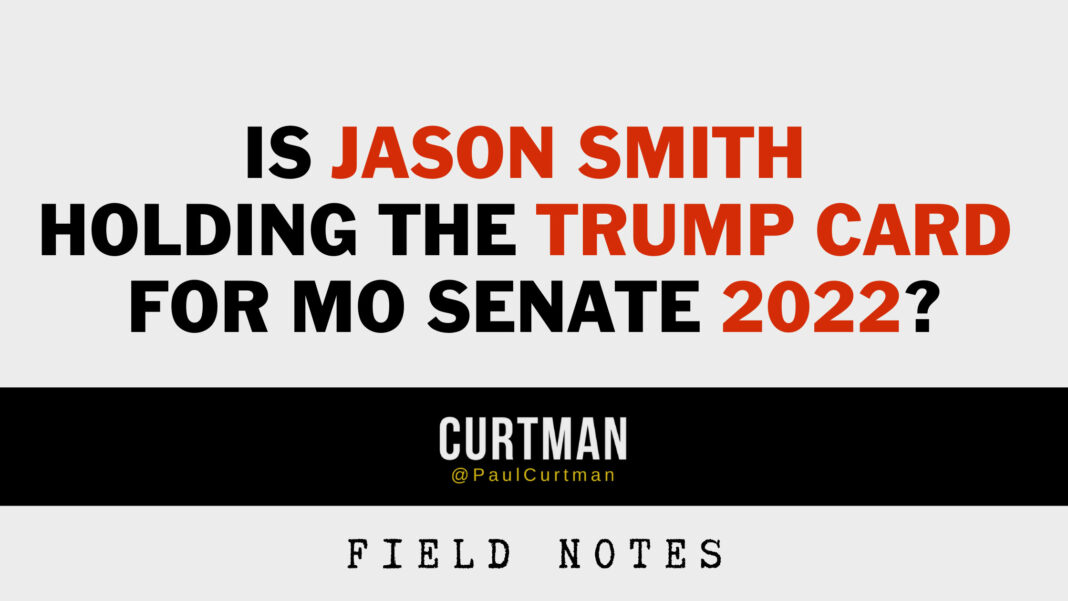 I told you last week that Congressman Jason Smith was consolidating support for a US Senate run by telling people that he had Donald Trump supporting him.

Congressman Smith is scheduled to be the recipient of a fundraiser at Trump’s Mar-a-Lago residence on Friday, April 30th.

His host committee for the event includes, Governor Parson of Missouri, Governor Kristi Noem of South Dakota, along with several of his fellow members of congress.

Here’s where it gets interesting: I previously mentioned that Former Governor Eric Greitens has released the endorsements of several members of Trump’s team like Rudy Guiliani, Sebastian Gorka and others. While that is a good way to signal a closeness to Trump, it isn’t ‘fundraiser at Trump’s home close.’

If Smith rolls out a Trump endorsement, the race is as good as his except, don’t count out Greitens just yet: even if you don’t understand how he could come back, recent polling measuring support for various candidates suggest that he has the base to run a viable campaign.

Many people in Missouri see what happened to Greitens as being done by the same people for the same reasons that they tried to run Trump out of office: because he was an outsider. And, it feels more personal because it happened in MO to their governor.

Don’t underestimate a strong Greitens campaign, even even if Smith has Trump on board.

Attorney General Eric Schmitt is running as having defended Trump’s America First agenda. His website states, “During Trump’s Presidency, Eric took the lead on backing up the Administration’s policies.”

This is Missouri and Trump still holds the keys to the castle for most conservative activists and voters. If Smith releases Trumps endorsement when he announces, it will be devastating to anyone else in the race because they will have to run against Jason Smith and Donald Trump even if they have their own endorsements from members of Trumps organization.