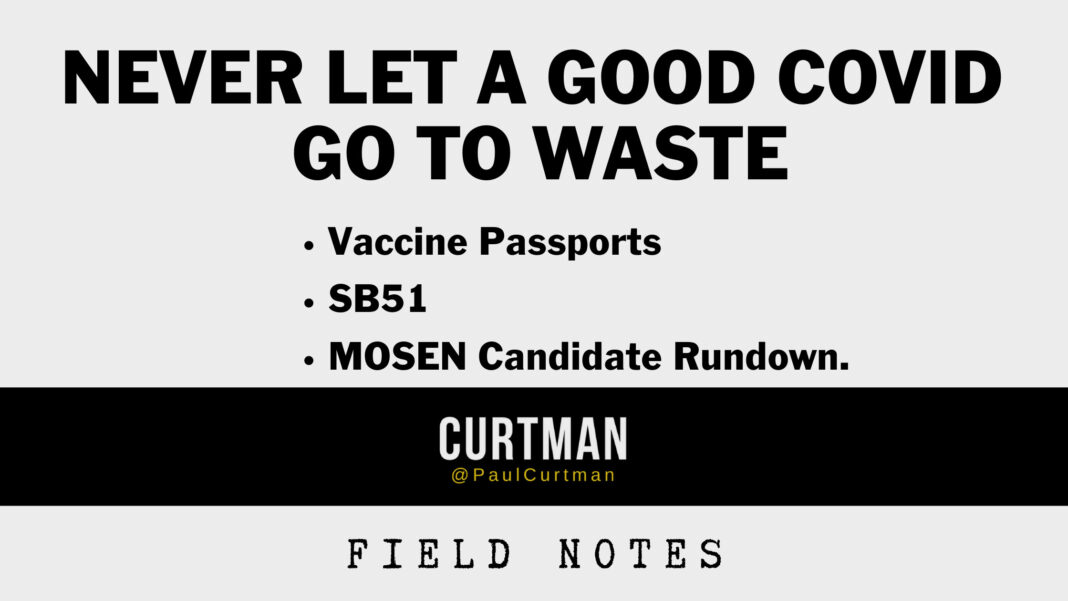 This has been a topic of conversation across the country in the last several months. Although vaccines are required for things such as enrolling your children in school, that is still a far cry from requiring people to present their “vaccine passports” before being allowed to enter stores, businesses, or travel.

I remember when I stood with Representative, now State Senator Rick Brattin and State Senator Will Krause against the implementation of the REAL ID in Missouri. According to the law, you need a REAL ID in order to gain access to public buildings, transportation, fly domestically and any other number of things. The requirements for what you can and can’t do based on your REAL ID status is determined by bureaucrats at the Dept. of Homeland Security.
At this point I’m merely speculating but it is plausible that somehow or another, our “vaccine passport” status could be referenced on our REAL ID in order to continue to travel or do business, and this could all become a regulation by the swipe of a bureaucrats pen behind a desk at the Dept. of Homeland Security.
My point is that due to decades of unaccountability, we have a system that is so far beyond the expressed intentions of the Constitution, that things could easily go from bad to worse in terms of authoritarian restrictions and the people have allowed it to happen.
Who really knows what the next couple of years might bring. I do know however, that Thomas Jefferson was right when he wrote, “The natural process is for liberty to yield and for government to gain ground.”
Share this post to let people know you stand with Senator Bill Eigel and the rest of the legislators who are taking a stand against the call for “vaccine passports.”

SB 51, sponsored by State Senator Tony Luetkemeyer, is one of those bills that seems to have been put forth with the noblest intentions. When you look deeper though, you see that there is a LOT more going on below the surface.As a Fellow at Club for Growth, I have the opportunity to discuss good policy with lawmakers and conservative thinkers from all across America and not to long after Covid restrictions had many businesses shutting down, one of our CFG fellows was quick to see the need for allowing people who chose to be open for business, a protection against frivolous lawsuits.That seems to have been the intention of SB 51 but as is often the case with politicians, a good idea for a bill becomes quickly laden down with measures that go far beyond it’s intended scope until it does more harm than good or does nothing at all for the people it is designed to help. I’m not sure how this bill does much to help anybody but lawyers. A business is still liable if they engage in: (17) “Willful misconduct”, an act or omission that is taken: (a) Intentionally to achieve a wrongful purpose; or (b) In disregard of a known or obvious risk that is so great as to make it highly probable that the harm will outweigh the benefit. (page 5 line 116)
So how does this bill not keep businesses scared to reopen? How does this bill protect businesses or churches from frivolous lawsuits?
How does this bill protect a business from somebody walking in and seeing that the business isn’t enforcing a mask mandate or the manager isn’t walking around with a tape measure enforcing strict 6 foot social distancing in accordance with health officials public recommendations?
Let me boil this down to one glaring problem. “Willful misconduct” is why the guy at the drive through will force you to wear a mask before he hands you your soda. “Willful misconduct” is why you get kicked off a plane when your two year old isn’t wearing a mask. “Willful misconduct” is everything you do that goes agains any local, state, or national health officials recommended guidelines that say the will help you “prevent getting sick.”
What this bill does not do is place the liability for “willful misconduct” on the shoulders of the person who made the personal choice to enter your church or business. What about their responsibility to stay away from places they think pose a risk? Last time I checked, it was still a bad idea to swing a stick to close to a hornets nest just as its a bad idea to go anywhere where you think you’ll get yourself sick. If you see a business and the customers aren’t wearing masks – leave.
Politicians often will use the stated good intentions of proposed legislation as cover to vote for it.
SB 51 will be used as cover for politicians to say they did something when in fact they just made it a little harder for businesses to defend themselves from government mandates and the frivolous lawsuits that they will have to defend themselves against.

From the web.
Declared:

If you want to see fake news in action read the post by Representative Justin Hill defending himself against an article published by the Kansas City Star where they deliberately misquote him and take him out of context.