Parson Appointee in Peril? POLL: Greitens in a STRONG lead. PDMP is Back. 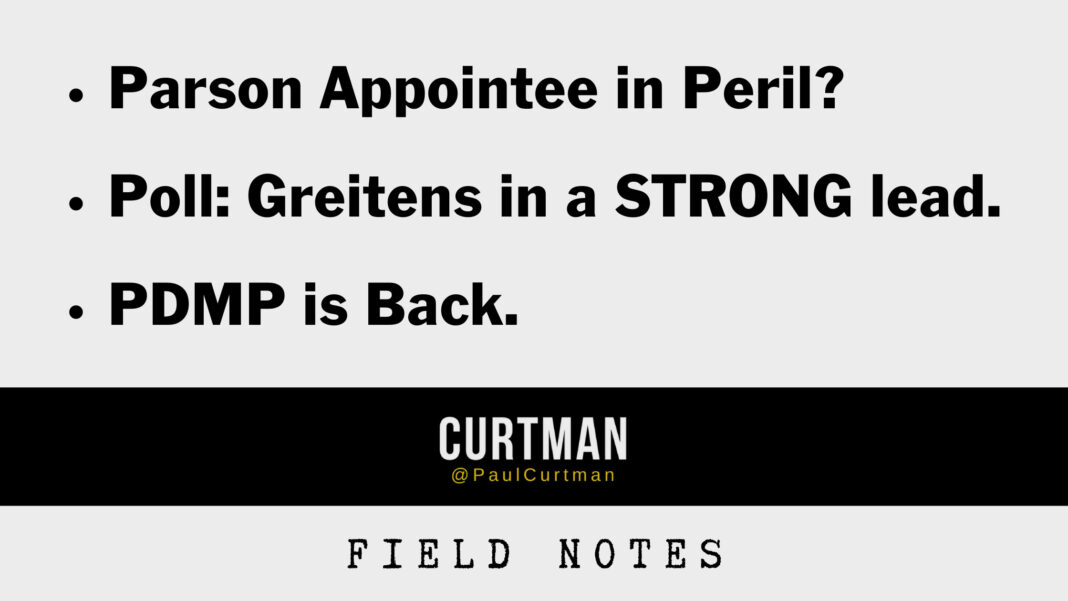 Last Saturday I told you I would be posting about a debate happening inside the halls of the State Senate regarding one of Governor Parson’s appointments – a few people in the building have their concerns and it is definitely worth knowing about and only leads to more questions that need to be asked and answered…
A handful of senators, possibly enough to stop an appointment dead in the water, seem to be resisting the Governors recommendation for a new member of the University of Missouri Board of Curators.
The appointee is Todd Graves. As in Todd Graves the former Chairman of the Missouri Republican Party.
Some senators are sharing their concerns, some of which including having a hyper partisan as a member of the board of curators but that’s not uncommon to have nor is it uncommon for partisan members of the legislature to resist the appointments of member of the opposite party. What is interesting is the controversy regarding Todd Graves law firm, Graves Garrett, and a recent “secret” study they were hired to do by the Missouri Gaming Commission.
Background: Graves Garrett was hired to defend former governor Eric Greitens n 2018 against allegations of misconduct. Graves Garret billed the state of Missouri over $118,000 which the Director of the Office of Administration, Sarah Stealman, refused to pay with the reason being that they were defending Eric Greitens on behalf of Eric Greitens, not on behalf of the state.
Fast forward to 2019, Graves Garrett is awarded a no bid contract to study work being performed by Missouri Highway Patrol investigators who are hired to investigate matters which the MO Gaming Commission uses to influence licensing decisions for casinos.
Now here’s the kicker – Graves Garrett didn’t study the operations of the Highway Patrol in terms of how they conducted the investigations, the merely studied whether or not commission members edited the Highway Patrols’ reports and how those edits might have affected the commissions decisions.
If the members of the Gaming Commission are editing reports that influence who gets a license, it seems to me that that information is in the public interest and the public should have access to the report that Graves Garrett put together.
The study cost over $408,000 and you aren’t allowed to see it. The Missouri Gaming Commission hasn’t released the report claiming it constitutes “attorney/client privilege.”
Good to know – so long as the state only hires attorneys to fill contracts, bureaucrats can fog the windows of transparency and render the sunshine law and other measures of accountability completely useless.
Again, the report didn’t study the Highway Patrol’s process, it merely studied how the Gaming commission might have edited or otherwise used the report to make licensing decisions.
To my knowledge, no members of the Missouri Senate has seen the report either. The question some senators are asking each other in private is about the merits of the study and whether or not it simply served as a way for Graves Garrett to get paid.
These questions are not unfounded when you consider the fact that David Grothaus, the former Director of the Missouri Gaming Commission, resigned last spring while at the same time accusing Governor Parson of stonewalling his efforts to cut costs and make the commission more streamlined.
About the report Graves Garrett was hired to put together, Grothaus believed it to be entirely unfounded and unnecessary, calling it “hogwash” and claiming it to be a “complete smokescreen.”
It’s just a matter of transparency. The people of Missouri are really tiring of the end run around our sunshine laws and other checks and balances designed to keep our people informed and our government accountable.
My guess is that senators wanting to climb the political ladder won’t make too much of a case about the details of what our government is doing and this appointment could sail through without any major complication…..but we’ll see – there are a few people in the building just as tired of the games as you might be.

GREITENS IN A STRONG LEAD

The Hill is reporting that polling for Missouri Senate puts Greitens at a strong and solid lead with 48 % of Missouri voters supporting him in his bid for the Republican nomination for U.S. Senate. The only other announced candidate, current Missouri Attorney General Eric Schmitt, received only 11% of support from the poll.
Here’s why this is – Missouri voters strongly supported Trump and see a parallel to what happened to Eric Greitens and what the left has been trying to do to Donal Trump since the day he announced his run for office.
It looks like people in the Trump organization might see the same thing and why people like Rudy Giuliani and Sabastian Gorka, Trumps former Deputy Assistant, among other Trump team mates, have already endorsed Eric Greitens in his bid for U.S. Senate.
This is understandable. When payments of over a hundred thousand dollars are being delivered in cash to attorney’s pursuing a case involving a witness who says under oath that she might have remembered her accounts through a “dream” – someone might get the impression that the entire process wasn’t as straight forward as the politicians in Jeff City would like for you to believe.
That being said, Greitens will still have to contend with the fact that this all started by his own doing and his opponents are going to make sure that everytime he opens his mouth to speak its to defend himself. We already got a glimpse of that he was interviewed by Hugh Hewitt last week.
Even with such a strong preliminary lead, Greitens is going to have to strategize and build a coalition strong enough to with stand what his opponents are planning.
– John Brunner, Ann Wagner, Jason Smith are names that are still being discussed by grassroots –
John Brunner could bring a lot of money to the race but if he and Eric Schmitt are both in then that almost ensures a Greitens victory if the polling data is even close to being accurate. Does Brunner support Eric Schmitt or does Schmitt drop out to support someone who can take the “outsider” narrative that Greitens will still be able to use? Brunner is also a veteran, something that no other Missouri Republican Federal candidate or office holder can claim.
The GOP establishment in MO is wanting to avoid a nomination going to Greitens but what will they do if he wins?
Will the State GOP snub republican voters and leave the seat unsupported to be won by a democrat just to spite a Greitens victory? And how do they expect to regain the trust of GOP voters if they decide to do that? Since it is the U.S. Senate, such an action would also negatively affect the trustworthiness of the GOP across the country.
OR will they decide to unite and overcome for the sake of better policy and a vote in a divided chamber that also decides such important issues as the future of the supreme court?
Poll numbers might give you an idea of how something is shaping up but they are not definitive.
We will continue to see poll numbers change over the course of the next year but one thing is certain – every candidate or potential candidate who has a stake in this race began to reevaluate their strategy when saw those poll numbers showing Greitens in a commanding lead.

Prescription Drug Monitoring Programs Aren’t WorkingState Senator Rick Brattin and Mike Moon are leading the fight to prevent the government from monitoring your health and prescriptions.Missouri is the last state to implement the Prescription Drug Monitoring Program (PDMP). Advocates cite the rise in prescription drug overdose and the need for the government to monitor your use of prescription drugs.
Big brother has gotten even bigger in recent years, especially with the authoritarian restrictions brought on by COVID – it seems like just yesterday, Apple was putting apps on our iPhones to monitor our whereabouts to track and trace or exposure to COVID to “protect” us from each other. Most people don’t even realize they have this on their iPhone.
Now there is talk from government leaders and require American citizens to carry a ‘vaccine passport’ if they want to travel, enter places of commerce etc…
The Missouri Senate however, is still trying to track your use of prescriptions drugs but here is my question? If Missouri is the last state in the nation to implementing the PDMP, why aren’t we the worse for prescription drug abuse and overdoses? We are actually right in the middle in state by state rankings.
They say PDMP will stop “doctor shopping” – maybe we should be going after untrained doctors instead of putting more people under the surveillance of government – especially for a program that hasn’t helped half the country with the program o better than Missouri which doesn’t even have the program.

PRINCIPLES NOT POLITICSThe purpose of government is to protect the rights of the people, not run their lives.

Send me an email at paul@paulcurtman.com or submit from my homepage.