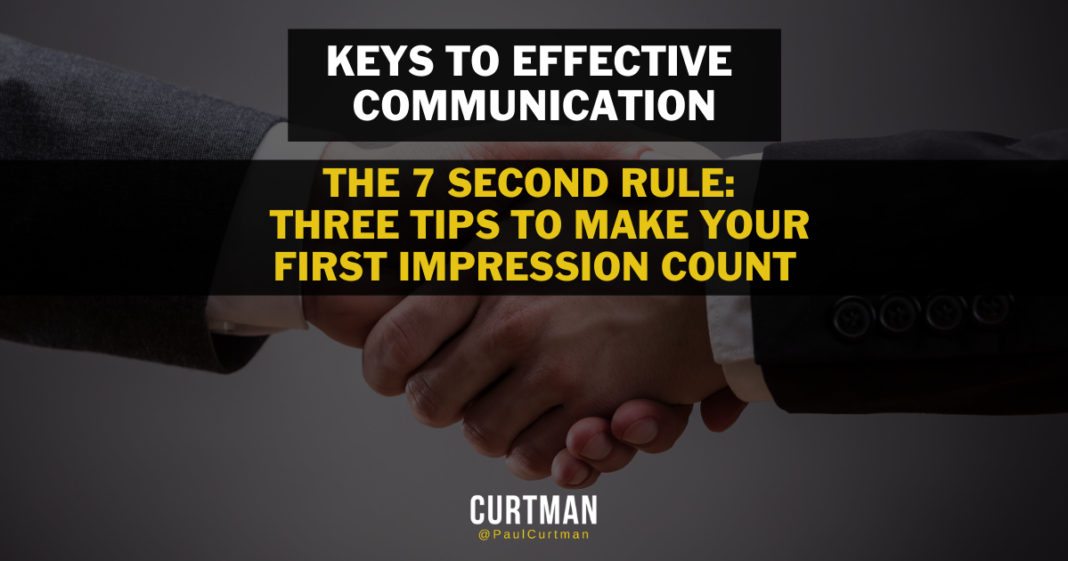 Research infroms us that it only takes us 7 seconds to decide how we feel about someone after we first meet them. First impressions are lasting impressions, they will make or break your presentation, your interview, or a possible networking contact. It is vital that you immediately establish rapport with your audience. Everything you say or do will carry the emphasis of your rapport – make it count.

What I’m about to tell you is a simple truth. It might seem unfair but nevertheless, it is a truth that you need to remember: People are going to judge you when they meet you.

People don’t show up at a first meeting owing you anything. When someone is meeting you for the first time, you have to make an impression that causes them to think to themselves how much they might like to do business with you or offer you that position. The way you dress and whether or not you seem interested in them will make a world of difference and so will whether or not you smile and show them empathy. There are a million ways to make the first impression count with person or the crowd that you’re meeting with and I’m going to give you just a few simple tips to build rapport at that very crucial first meeting.

The eyes are the window to the soul.

I spent eight years in elected office and one thing I hated seeing politicians do as much as I hated having it done to me is when someone would talk to me but be looking around the room. Maybe even worse than that was when someone would shake my hand and but be searching out whose hand they wanted to shake next without even looking me in the eyes even once. If you want people to know how unimportant they are, don’t bother to look at them. Looking someone in the eyes while you talk with them or shake their hand is vitally important. It lets them know that they have your attention, that they are important, that there is a bond between the two of you, at least for that moment.

There is a story about two men who met with the Prime Minister of England, William Gladstone, in the 1870s. One of the men remarked to the other about the impression their meeting had on him. He said of Gladstone, “He left no doubt in my mind that I was being treated by the most important man in Europe.” A few years later these two men met with next Prime Minister of England, Benjamin Disraeli. When their meeting was over the same man said to his friend, “He treated me as if I was the most important man in Europe.” This is the difference that eye contact makes when you’re meeting with someone or a group of people or a crowd. Look them in the eyes, it lets them know they are important to you.

It costs nothing but creates much. It enriches those who receive, without impoverishing those who give. It happens in a flash and the memory of it sometimes lasts forever.

When I first began public speaking, I was sharing a message that was very close to my heart and I was able to connect my message to my audience emotionally and with enthusiasm. Although I was getting my message across, something was missing – I was failing to connect as a person. One day, after a talk I had given, a friend that was accompanying me to these meetings kindly suggested that I make an effort to smile during my speech. I didn’t give it a second thought and began making a conscience effort to smile from that point forward. The affect was immediate. Before, I would get a lot of applause during my speeches and then everyone would leave but now that I was smiling at them, people would want to hang around and talk to me afterwards.

Making eye contact with people is the first step to establishing rapport but incorporating your smile where you can will get you there faster and make you more approachable along the way.

3. LISTEN AND BE RESPONSIVE

You never get people’s fuller attention than when you’re listening to them.

People judge you on whether or not you’re a good listener based on how you react to what they’re saying. So then, if you want people to know that you’re listening, you have to react. Here’s the catch: you have to actually listen in order to react the right way to what they are saying. If someone tells you that their mother recently had a bad fall, you don’t smile and say, “Amazing!” Someone with a heart would say ‘Oh NO!” while at the same time setting down whatever is in their hands before asking, “Is she OK?”

People are not only responsive with what they say but also with what they do with their body language. Setting down whatever is in your hands is just another way of signaling to someone that you are giving them your undivided attention, it’s an attentive response when someone tells you something that’s deeply important to them.

Reacting is doing more than saying, “Uh-huh.” “Yep.” “Wow.” and “Really?” While you’re talking with someone. Anyone can do that throughout a conversation. You want to respond specifically to what you’re being told in a way that lets your audience know you heard exactly what they just said.

Want to learn more about establishing rapport with your audience or have questions about this post? Contact me HERE.