The Remedy to Broken Men 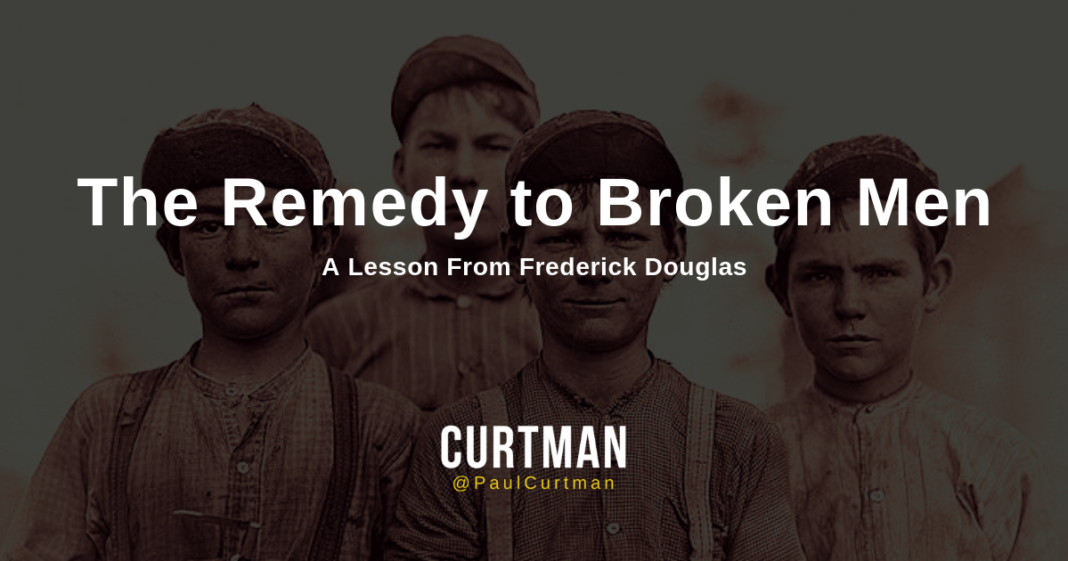 It is easier to build strong children than to repair broken men.

Frederick Douglas knows what he’s talking about. Douglas was born as a slave in 1818 and after he turned 16 years old, his master sent him to a man named Edward Covey. Covey had a reputation for breaking the spirit of rebellious slaves and was exceptionally violent and bloody where Douglas was concerned. After one terrible beating in particular in which he describes a wound on his head so deep that the “blood ran freely,” Douglas ran seven miles, barefoot, covered in blood and dirt, back to his master’s house to ask for protection. His master did nothing and instead sent him back to Covey. A day or two later, as Douglas was going about his chores, Covey attempted to tie him up and beat him. At this moment, the moment when Douglas was physically weak and vulnerable, something amazing happened. Douglas writes, “but at this moment – from whence came the spirit I don’t know – I resolved to fight; and suiting my action to the resolution, I seized Covey hard by the throat; and as I did so, I rose.” After a two hour long battle having fought off one other man and scaring another away who had come to the aid of Covey, Douglas emerged from that fight the victor. Douglas goes on to write, “This battle with Mr. Covey was the turning-point in my career as a slave. It rekindled the few expiring embers of freedom, and revived within me a sense of my own manhood…….I did not hesitate to let it be known of me, that the white man who expected to succeed in whipping, must also succeed in killing me.” WOW! As a species, we are by nature broken, incapable of perfection but that doesn’t mean that men within our broken species are incapable of greatness. Men can be broken in many different ways – the trauma of war, the loss of a child – many things can break men emotionally or break their spirit. This article is not about them but rather about the men of broken character. These are men who prey on the vulnerability of others or who don’t think twice about lying to advance their own agenda or profit at the expense of others. This article is about men who have compromised their character for their own gain or to avoid the pain of doing what sometimes accompanies taking a stand and doing the right thing. The strength of our world, communities, churches and families is severely impaired by men who are incapable of rising to the occasion of fighting back – standing with strength and able to save us from the great terror brought down on us by those who would do us harm. The reason people lose their liberty is because of weak men. The reason the justice system fails is because of weak men. The reason for so many women wishing to have an abortion because they fear being a young single mother is because of weak men. The reason evil men triumph is because of weak men. The reason that churches aren’t alive with God’s power is because of weak men. The greatest deeds and actions throughout history have been undertaken by the leadership of men who had the strength and the wherewithal to stand under the greatest amounts of pressure and withstand the greatest pains in order to accomplish something great.

Broken men are incapable of standing strong under pressure. We see this in our politicians – so many of them are broken and the ones with enough strength to stand are usually marginalized and run out of office by the rest. Why? Because they actually stand for what they campaigned on? I’m going to use politicians because they are a good illustration of one of the most terrifying kinds of broken men. They are arguably the most dangerous as well. In their public life, giving speeches, they have strong words to say about how strong they are but giving a speech to a friendly crowd of supporters hardly constitutes taking a stand. We see how weak they really are when the moment of truth comes – the moment we would expect them to give the same speech, with all the fire it had when given to the friendly crowd, only now delivered to the face of the opposition. Rather than standing, they fold. I’ve seen this first hand. They either fold because they don’t want to “rock the boat,” as they say, and upset their colleagues, or maybe they sabotage the effort they purport to support for their own personal reasons – reasons that they weren’t strong enough to just be honest with the people about. This type of brokenness is the most dangerous because they are so willing to lie to cover up their own weakness, all the while continuing to give speeches full of promises to stand strong while they are making plans to sit down at the moment they are needed to stand.

It isn’t just politicians either, it’s husbands and fathers. I’ve had the unfortunate experience of working with men who want to pursue something so badly that they decide to put their family’s needs and comforts last. I once had a middle-aged man reach out to me to ask me about how he should get started in politics. The first question I asked him was what he did for a living. He told me he was unemployed. At that point, I asked him how his family was getting along and he said they were living off a few months-worth of money he had in savings. His hope was that he could run a campaign over the next year, get elected and live off the salary of the position. In the meantime, he said, making money would be a bridge he would cross when he came to it. I told him that was a terrible plan. I told him his family needed him to be a provider more than his town needed him to be a mayor and it would be better if he secured a job before putting his family at risk of losing everything because he didn’t have reliable income to provide for them. This was sound advice but he already had ideas of where his political career would be taking him and I quickly learned there wasn’t anything I could say to get him to consider his family first. He wasn’t strong enough to do his duty as a husband and a father – he was crippled by his own ego. I’ve seen others go through the same thing and I’ve seen families ripped apart by the poor decisions of weak men who fail to follow through on the commitment they make upon entering the role of husband and father, a role that requires them to be the protectors and providers of their families.

Greatness doesn’t happen by accident. What is the solution to the reign of terror that broken men lead people into? Men like these that lead our nation into trillions of dollars of debt and men like these that lead us into all-time highs of unwed mothers, abortions, broken families etc. Not that we should not try to strengthen weak men but what else can be done to protect us from them? Here is the answer: focusing our efforts on building strong children. Frederick Douglas had it right. Salvation from broken men lies in the strengthening of the youth. There will come a time when we need them to rise and take by the throat, the issues that reign down blows of terror and pain on the rest of us and to rekindle that sense of value and honor that we should all defend.

To undo the damage brought on us by broken men is to set out on an enterprise that has far less return on the energy expended than if we would just focus on building strong, resilient, honorable and moral children. The only way to protect ourselves from morally broken and weak people and the subsequent terror they bring is to as quickly and soundly as possible, replace them with strong men who have been taught from an early age a commitment to the truth and what is right. Believe it or not, there are people in this world who do what is right regardless of the consequences – they see the bigger picture. They want to be on the side of truth and they’re willing to take their honor to their grave rather than give it up for just another moment in the limelight. This is the kind of sentiment we need to instill in our children. As parents and adults, this is the issue that, like Douglas, we should at this moment, seize hard by the throat and rise to the occasion lest we allow ourselves to be driven further into the bondage of broken men.