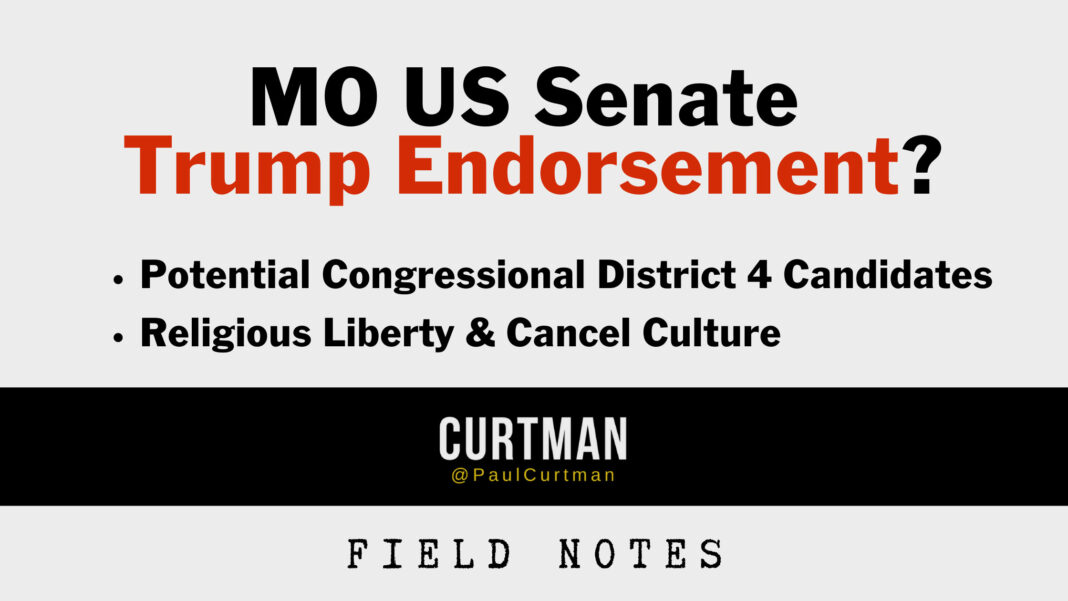 More candidates lining up for a US Senate run.

She might be the only woman in the race. That is a plus for her.

She isn’t the most controversial congressperson out there but she has taken a stand against tax payer dollars going to cover the cost of sex reassignment surgery for transgender members of the military.

This is a big issue right now as President Biden has recently reversed the Trump administration’s policy on transgender people in the military.

This will speak to fiscal and social conservatives and her public stand will be even more meaningful in an era where so many are refusing to speak out for fear of the growing ‘cancel culture.’

As recently as a couple weeks ago Jason Smith had been making calls to supporters, and according to one call recipient, telling people that Trump is with him.

If this is true it’s a big deal.

Smith has been an open ally of Trump since the beginning so it wouldn’t surprise me to see this happen but the question then is this: why is the rest of Trumps team endorsing Greitens? Greitens was just endorsed by Rudy Giuliani and other members of the Trump organization.

Between the two announced candidates, Schmitt and Greitens, both soundly defeat the democrat candidate.

A Couple Potential CD4 Candidates to Take Note Of.

If Congresswoman Hartzler makes her announcement to run for US Senate, which I expect to happen, it will open up her congressional seat.

Don’t count out others who haven’t been in elected politics for a while, Vicky Hartzler had been out of the MO legislature for years when she ran and got elected to congress.

Many grassroots conservatives would say Caleb is an establishment Republican for sure, but from my experience, he sometimes does tend to be conservative leaning.

He will have a tough sell that he’s a proven conservative fighter though and I’ll explain:

When he was in the house, he voted against the Religious Liberty bill proposed by Senator Onder, SJR 39, which would have protected people of faith from facing penalties for running their business in accordance with their sincerely held religious beliefs – think Christian bakers being targeted for not wanting to bake wedding cakes for same-sex ceremonies.

Missourians, and arguably most Americans, are growing increasingly angry and frustrated over the cancel culture and the politicians who won’t stand up against it.

Although I never heard Rowden say this, I did hear several legislators explain that his NO vote was because he was in a tough seat. I get that legislators have to pick their battles. If that is true then that becomes another liability towards earning the trust of conservatives, especially after four years with Trump.

One reason Trump was so popular is because he expected to be hated – so he was ok with being hated. That made him all the more bolder and people across the country took it as a breath of fresh air, even if they didn’t like some of his tweets from time to time.

I wrote an article titled “If You’re Going to Stand Up, Expect to Get Hit.”

Everybody in office or running for office should give it a read.

If you’re a conservative in CD 4 and Caleb Rowden is a candidate. Ask him about this and any other vote he has taken. Even if you don’t agree with his reasoning, from my experience, you’ll appreciate his thoughtfulness in replying

It was a bill that clearly protected people’s rights of conscience where the administration of their business was concerned, something we want everyone to be able to do whether they are Christian, Muslim, Jewish, atheist or whatever.

But when we weaponize the cancel culture with the force of government, we are crossing into dangerous territory where people are coerced to think and live a certain way – another way of bullying them into compliance just for having different beliefs.

Punishing people for doing business according to their personal religious beliefs is also a slap in the face of the market and closes the door to other people who would like the opportunity to make some money from the business that someone else declined.

If one person doesn’t want to bake a cake for a ceremony that undermines their personal religious beliefs then all that means is someone else stands to make a few bucks for making the cake instead.

People will vote with their pocket book and we don’t need the government punishing anyone based on their faith.

Rick is an easy choice for conservatives but he might be interested in staying in the senate for 7 more years.

Rick is a bold conservative and original member of the House Conservative Caucus that formed in 2016.

There are organizations that seek out proven conservatives to equip with the resources they need to run for federal office and Rick would be on their list for CD4.

This would make him a viable opponent to anyone else in the race.

Over the weekend, Rick Brattin attended the Boone County Lincoln Day Dinner in the eastern portion of CD4 which is in Caleb Rowden’s Senate District – so don’t think Rick doesn’t see CD4 as a possibility.

If these two were in a primary race, Rowden would have to bring more to the table to demonstrate that he is a real conservative and isn’t afraid to stand up for conservative policy that protects people’s rights.

One way he could do this if he wanted, since he is the senate floor leader, would be to help the senate conservative caucus’ priorities find their way to the house.

Rick is a new Senator with over 7 years left to his potential senate career.

There will be some backroom meetings if both these senators both start taking a serious look at CD4.

Who knows, it’s so early maybe neither of them run.

I told you last week that Congressman Jason Smith was consolidating support for a US Senate run by telling people that he had Donald Trump supporting him.

Congressman Smith is scheduled to be the recipient of a fundraiser at Trump’s Mar-a-Lago residence on Friday, April 30th.

His host committee for the event includes, Governor Parson of Missouri, Governor Kristi Noem of South Dakota, along with several of his fellow members of congress.

Here’s where it gets interesting: I previously mentioned that Former Governor Eric Greitens has released the endorsements of several members of Trump’s team like Rudy Guiliani, Sebastian Gorka and others. While that is a good way to signal a closeness to Trump, it isn’t ‘fundraiser at Trump’s home close.’

If Smith rolls out a Trump endorsement, the race is as good as his except, don’t count out Greitens just yet: even if you don’t understand how he could come back, recent polling measuring support for various candidates suggest that he has the base to run a viable campaign.

Many people in Missouri see what happened to Greitens as being done by the same people for the same reasons that they tried to run Trump out of office: because he was an outsider. And, it feels more personal because it happened in MO to their governor.

Don’t underestimate a strong Greitens campaign, even even if Smith has Trump on board.

Attorney General Eric Schmitt is running as having defended Trump’s America First agenda. His website states, “During Trump’s Presidency, Eric took the lead on backing up the Administration’s policies.”

This is Missouri and Trump still holds the keys to the castle for most conservative activists and voters. If Smith releases Trumps endorsement when he announces, it will be devastating to anyone else in the race because they will have to run against Jason Smith and Donald Trump even if they have their own endorsements from members of Trumps organization.