What do the Bible, Easter Eggs and Movies Have to Do With Passing Judgment on Others? 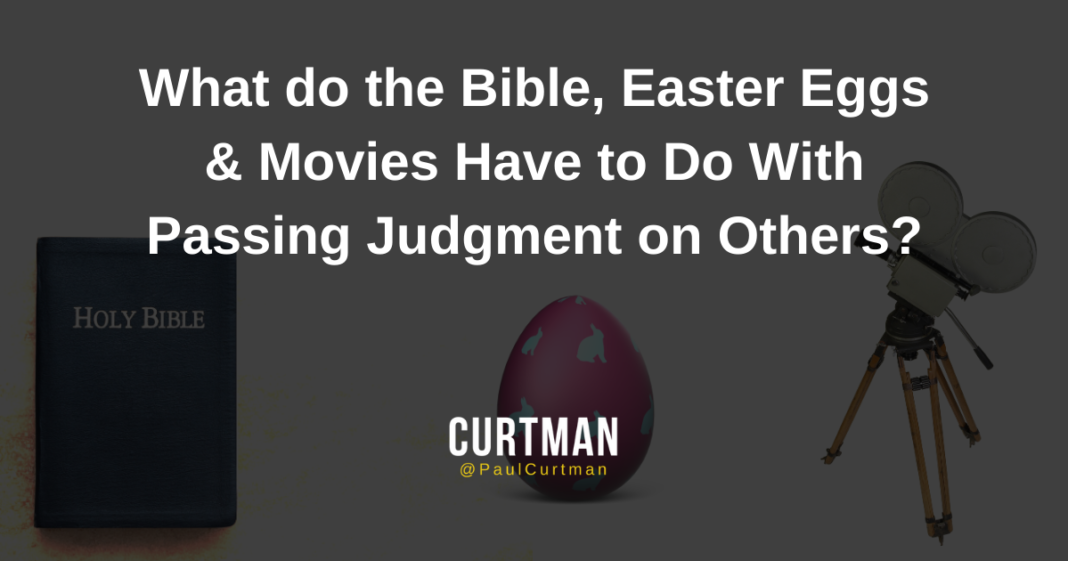 Could you describe the plot, context, characters and story arc after watching a one minute clip of a movie you’ve never seen or heard of?

Turns out most people think they can as long as it comes with a headline shared by a Facebook friend.

An “Easter egg” is a hidden or otherwise unexpected feature in a movie that gives information the viewer previously might not have considered. Sometimes it verifies the time and place of a scene or it creates a context about the characters or their relationships. Sometimes an easter egg in a movie might make the hero seem less heroic, the victim less victimized, or it might make an otherwise villain an anti hero, someone who does heroic things for less than heroic reasons.

Have you ever sat next to a person who talks the entire way through a movie trying to predict why something happened or what is going to happen next? You might begin to feel toward them the same way you would someone who is quick to judge you or anyone else. It says a lot about someone who openly passes judgement on someone else before they have enough of the story.

Ironically people who like to judge other people for making judgments about other people like to tell them that scripture tells us not to judge and they quote one of the most misused passages of the Bible where it says in Matthew 7:1, “Judge not, that ye be not judged.” But before anyone passes judgement on what this means, they might want to get the rest of the story and read a little further to find the context of that statement.

Matthew 7:2 says, “For with what judgement ye judge, ye shall be judged: and with what measure ye mete, it shall be measured to you again.” In other words if you don’t want people judging you, then don’t judge other people -“Judge not that ye be not judged” and “what judgement ye [do] judge, ye shall be judged.” This is clearly telling us that our acting of judging other people gives other people evidence to judge us. They might judge our degree of compassion, understanding, wisdom or sense of justice. French poet and essayist, Paul Valery once said, “Our judgments judge us, and nothing reveals us, exposes our weaknesses, more ingeniously than the attitude of pronouncing upon our fellows.”

You might learn a lot about a movie from a one minute clip and what you see might give you insights but it doesn’t give you the whole story. To get the whole story, you have to watch the whole movie sometimes you need to watch it more than once.

Don’t be too quick to judge other people from their one minute clip. There is usually a lot more to their story and they may not be the victim or the villain the popular ‘headline’ would have you to believe.

I’m not saying don’t judge, I’m saying be a good judge and consider what your judgments say about you as a person. Are you a good judge of someones character? Do you have a deep sense of understanding? Are you weak-minded in that the person who speaks to you last is the person who bears the most influence on you in spite of the truth? I’m saying be patient- watch the movie play out a little longer, look to see if there are any hidden Easter eggs that others might have missed that help tell a more complete story and create a deeper context. This is especially more important when the stakes for someone are high or when the story could be more complex than you might think.

Let the whole story confirm your assumptions or let it inform your opinions.

We live in a day when people get outraged at a perceived offense without any other context than that what they perceived is THE reality but it often isn’t. Just wait a bit- it’s a good reminder for us all. People deserve our good judgement.

Wait and try to get as much of the whole story before you decide the person you’re looking at is the victim or the villain because like a good story, there might be something else going on that would change your mind if only you waited for more information.

The point of communication is to inform someone so that you have a shared understanding of your message. By the time you finish speaking, your audience should understand what you said as well as why you said it with the goal being that they should feel the same way about your message as you do.

Good communication is an art and a science. There are clearly defined rules that can help you communicate better and at the same time, some progress only come with the experience.

If you have a problem with communicating, it is likely that you are failing in one of the following ten ways. Over the next several weeks, I’ll be sending out practical tips that can help you get ahead of these failures and start communicating with more clarity and effectiveness.

Here are the ten reasons you are a failed communicator:

Book Recommendation: You Are the Message by Roger Ailes